Parenting from the Couch

I thought I had found the magical secret to eternal junior department sizes after the birth of my second baby. Though I once again had no issue losing the more than recommend weight gain of pregnancy, I found the scale continuing to tick down to numbers I hadn’t seen since junior high.

I was certain I’d found the secret to weight loss with the combination of running and nursing my latest addition. I was raiding the pantry like complusive snacking was my job, and the numbers on the scale clearly did not reflect my nightly hankering for ice cream. I declared to anyone who would listen that I would be nursing and running for the rest of my life, since losing weight while eating unlimited french fries was my wildest dream come true.

I continued to brush off the unnatural weight loss and a series of obvious symptoms to all those joys of the postpartum body, and continued on with my life as a mom to two young boys. I blamed the evening exhaustion on midnight feedings, the often painful trips to the bathroom as one of those lingering gifts of pregnancy, and the frequency with which I flushed one of the mere perks of running.

By the time I realized that I had more than a postpartum excuse, I was waking up from a colonoscopy to hear the words “malignant” as the doctor handed me a small photo of a tumor.

Being told I had cancer took the air out of the room. It was as if every expectation I had for the future was shot down in flames with a single word. And of all cancers to have, I happened upon one of the least sexy of them all. I wasn’t the older, overweight, inactive man I always associated with the disease. I was 34-years-old, at the peak of fitness, and living a lifestyle of prevention. People like me didn’t get colon cancer. 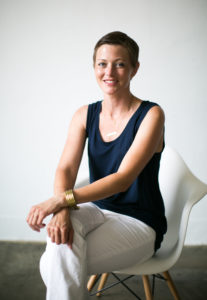 I’m sure everyone can reach out and touch someone they know who has experienced that dreaded diagnosis. And though I belong in that large group of survivors, I’m also a member of an even more exclusive club. I wasn’t just a women with cancer, or a young person with cancer; I was a mom with cancer. I was the mom of very young, dependent children who still needed me to meet their every need. How was I suppose to squeeze cancer in between lullabies, sippy cups, and skinned knees?

I still had a list of milestones to look forward to, diapers to change, alphabets to teach and lunches to pack. And in the weeks that followed, I continually found myself sobbing on the floor of the shower, wondering if I would be around to see my oldest child off to kindergarten. I wondered if this baby who was so obsessively in love with me would grow up to know how much I loved him back. I wondered if I would live long enough for him to even remember me, and wondered if I could love my children enough to last them a lifetime.

I was optimistic for the surgery that would remove a small part of my colon and effectively put everything back together in original working condition. Though 9-pound babies had been amazingly kind to my belly, I joked that I looked forward to the new and improved belly button that would come with the 3 inch scar I’d be left with. I was trying to use humor and vanity to keep my head above water in the midst of a storm.

Before having children, I committed to staying home with them during the early years for the simple reason that I never wanted to miss a moment. I wanted to sail through early parenthood with no regrets. Yet here was cancer, the uninvited guest who had shown up to spoil the party. While I spent a week recovering in the hospital on my mini-vacation of heavy narcotics and no responsilities, that little nursling I left behind started to walk. When I finally got home, all my attempts at pumping in the hospital were futile when I found he had no interest in what I had to offer any more.

I should have seen it as a sign for things to come, as cancer would happily move in and continue to interrupt motherhood as I knew it – or rather as I had hoped it would always be.

It has been almost five years since I started this journey, and my kids have grown and adjusted to a life that’s just a little bit different. My now 8-year-old knows terms and has witnessed procedures that surpass most adults. He has been to more chemo infusions than many going through chemo themselves. He has stood beside friends who have been left fatherless because of this disease. People can look down their noses and sneer at the exposure he has had to such a grown up world, but it’s easy to forget that this is a disease that can’t be boxed up and kept behind closed doors.

My kids often tag along to the oncology building because I often don’t have a choice, or  because it’s just simply easier to bring them. So many times I have to tell them mommy is too tired or mommy is too sick to help them enjoy the carefree days of childhood, and they take it in stride.

They have gotten into the rhythm of my bi-monthly chemotherapy treatments, knowing that it can often disrupt their own plans and expectations. They can walk into an infusion room without staring at the funny equipment, the bald heads, or the rows of recliners. In a world that is so dominated by older adults, I like to think of my kids as human therapy dogs. Their sweet smiles and pleasant dispositions helping to brighten up a place so that is so often filled with darkness.

Cancer truly is a family disease, interrupting the life of every member who lives around it. This has ultimately led to a shift in our priorities as we journey on. I count myself lucky in that I can’t change the cards I’ve been dealt, but I can appreciate the perspective with which it has gifted me. I remind myself daily to find the moments of gratefulness, because I know that even when I can’t get off the couch, I’m still here to love my kids.