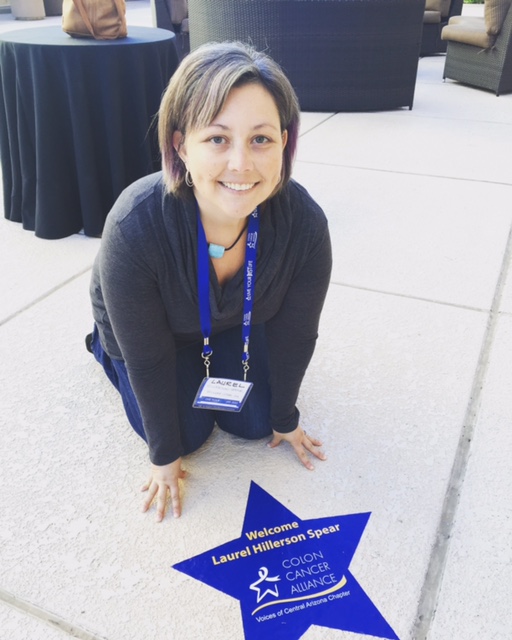 On May 29th 2014, exactly one week after graduating from my Master’s program, I was diagnosed with Stage IV Colorectal Cancer at the age of 32. Due to the amount of metastasis, doctors have little hope for a cure. I will leave behind my loving partner, Steve, and my beautiful young daughter, Fiona. I am a life-long resident of the Santa Cruz Community, and have resided in San Lorenzo Valley since 2009. I’ve worked in non-profit social justice programs for over a decade as a case manager, advocate, administrator, and resource developer. This is my cancer story.

My symptoms began in March of 2014, and consisted mostly of pelvic pain, nothing that would indicate a problem with my colon. When the pain did not subside after several weeks, I contacted my ob-gyn and was given an appointment about six weeks later. A visit to urgent care resulted in no information or reason for the mystery pain. After pleading with the gynecological team, I was given an ultrasound, which again showed no visible reason for my pain- no cysts or problems in my uterus. Speculating that it was some sort of infection, I was given a large dose of antibiotics and sent on my way.

Two weeks passed and the pain intensified so I called and demanded the next level of testing. I was in so much pain and no one believed me or knew what to do; medical staff treated me as though I was making it up and continued to ignore the severity of my cries for help. In late May, 2014, after fighting with insurance a CT scan was ordered; the scan showed seven tumors on my liver, which I now know were consistent with colorectal cancer, though no physician told me that piece of information at the time.

I was referred to a gastroenterologist and was told it was precautionary and more because she had previously worked as a liver surgeon. A colonoscopy was ordered, a large tumor was found, and just like that I was officially diagnosed with Stage IV rectal cancer. A PET scan confirmed that multiple distant lymph nodes were cancerous, and my already grim prognosis became terminal. I was given 2 ½ years to live.

I was fit, always exercised, socially drank, and never smoked; I am a lifelong vegetarian and I have no family history of colorectal cancer.

When I was told that I had Stage IV cancer, I believed I would be dead within months. No one said this to me, but my mind went to the worst case scenario. My daughter, Fiona was only three. I told the oncologist that I couldn’t have cancer because my daughter needed me. The night I was diagnosed was also my first of many panic attacks. I was laying in bed when I woke suddenly. I had left water in the tub from my bath and heard Fiona drowning. I tried to move but my legs didn’t work. My heart was racing and I couldn’t breathe. I needed to get to my baby and was paralyzed. I woke my husband and told him that Fiona was drowning. He jumped out of bed to get her, but came back and rubbed my back gently explaining that she was sound asleep in her bed, and that the tub was empty.

I never knew that fear could be so real. I vowed then to suspend my beliefs about our bodies’ natural ability to heal and western medicine (something I never used, having relied mostly on alternative modalities of treatment), and made the decision to fight for my life. Had it not been for Fiona, I am certain that I would have chosen to travel and enjoy the remaining months of my time in this world.

I started an aggressive course of chemotherapy in June 2014. Nothing could have prepared me for what chemo would do to my body. I immediately went from an active 32 year old, to someone 50 years my senior. I was so, so tired. I couldn’t eat or hold cold things because the nerves on my hands and throat made cold feel like a million daggers poking through my skin. The tips of my fingers went numb. My vision blacked out several times. Explaining my pain and lack of participation in our normal life to beautiful Fiona was the hardest part of all.

In October 2014 I had a two stage liver resection; the surgeries were just eight days apart.

When I finally showed signs of recovery, the Stanford team suggested that I continue to be aggressive with my treatment, and in November 2014 I did a very intense five-day course of radiation, rather than the standard 28 days. Radiation went through my ovaries, resulting in instant menopause. Just one week after finishing radiation, I had yet another surgery. This time the team debulked the rectal tumor, but they were unable to remove it entirely because it was pushing against nerves and blood vessels on my vaginal wall and back.

I also was given a temporary ileostomy bag (my small intestine was routed out of my stomach and attached to a bag that collected my stool), which I had for three months while my colon healed. This surgery resulted in the loss of my entire rectum and 12 inches of colon. The ileostomy bag was very challenging; I had allergies to the adhesive material, and constant hives. I also had to empty it up to ten times per day, which was hard with a packed schedule that included work, toddler activities, and endless medical appointments/treatment. In March 2015 it was determined that my colon had healed and I had the ileostomy reversed. However, the reversal surgery resulted in total fecal incontinence, an issue that I dealt with until finally deciding to get a permanent colostomy bag in January 2016.

Going back a bit, after the two liver resections in October 2014, the radiation in November 2014, and the rectal surgery in December 2014, a follow up scan in January 2015 showed that the cancer was already back on my liver. My cancer progressed with five separate therapies in 2016. A scan in January 2016 revealed significant new disease in my lungs, chest and stomach. After over 50 rounds of chemotherapy, I have exhausted all options. In February 2017 I will enter the world of clinical trials. Though their success rate is small, I believe that it’s my responsibility as a patient to participate in a trial; I have outlived my prognosis because someone 20 years ago participated in scientific discovery and it’s my pleasure to help propel science forward.

My goal is to keep Fiona unaware of the harshness in this world, while still being open and honest with her about my cancer. Kids are very observant and know more than a lot of people give them credit for. This was very apparent when she visited me at the hospital following my liver surgery: just shy of her forth birthday she walked in the room, hesitated, looked me in the eyes, and asked, “mommy, are you going to die?” Having never discussed death or had someone die during her short lifetime I was shocked and I answered truthfully: “Fiona, everything dies eventually and I am doing everything I can to be alive as long as I can for you.”

I try to answer her questions in an age appropriate way and invite her to participate in my medical appointments, chemo infusion sessions, and into the room when I am changing my surgical dressings. She has touched my surgical staples and watched my port get accessed and de-accessed. She has also had to grow up faster than a lot of kids and knows to bring a trashcan to the bedside when my tummy hurts. She asks if weekends are a medicine or non-medicine weekend, and knows that non-medicine weekends mean that I actually have the energy to play with her. I have had to change my child raising philosophies, including allowing television into our home, something that I never believed in before. Raising a young child while battling cancer and on the “chemo for life plan,” is something that I don’t wish for anyone. It’s hard and truly sad.

Having cancer has forced me to reevaluate my priorities. Before treatment, work and advancing my career were the priority. I worked hard to finish graduate school and I had secured a management position at my nonprofit. I had Fiona in full-time daycare, so that I could take care of my needs. I would complain about meaningless things. I have since shifted everything. I have adopted an attitude of gratitude. I look at every experience with Fiona as a chance to create a memory of me for her to savor after I pass. I embrace her needs, rather than look at things as an inconvenience. I am in the process of making her a birthday present for every birthday ages six to 21. I want her to know how much I love her and think about her future without me.

For the last 12 years I have worked in the field of mental health and homelessness. I have worked hard to be an advocate and a resource for many. Unfortunately, as my disease progressed I was unable to continue employment. After one year I reduced my hours to part-time, and after two years I had to quit my job. With this new life, I continue my advocacy efforts and work hard to educate my oncologist about the realities of having cancer and raising a young child. She was not aware of the gaps that exist in the disability system with regards to insurance and disability. She also kept telling me to rest, which is impossible with a preschooler. When I am in pain, I can’t take an opiate and go to sleep. I need to have a clear head so that I can continue to work and be a safe parent.

I have also done a lot of work with my friends, many of whom never knew that CRC touched young people. I volunteer with a local women’s cancer organization as an advocate and on their resource line. I’m also a Blue Buddy through the Colon Cancer Alliance. As a buddy, I hare my experiences and give them information about disability benefits and their rights as someone with an illness. Community, and relying on community has been a gift throughout my process; I have found that when I share the real me, people come out and are more willing to share their stories. A lot of people have been touched by CRC, but few had talked about it publicly.

I continue to live my life, modifying and taking time for me, as needed and as life allows. I talk publicly and do as much as I can to make sure that people listen to their bodies and fight for their basic medical rights, even in the face of disbelief and insurance barriers.

Fiona’s House is my tribute to and my legacy for Fiona. She is my everything, and this community will be a better place, a more knowledgeable place, because she entered my world.